My history with computers

I have used computers for almost my entire life. Of course, this is becoming an increasingly less meaningful statement, and it's true for almost everyone younger than me. I used to think that my history with computers was fairly uninteresting and not worth writing up. I just barely caught the tail-end of the 8-bit home microcomputer era, and was too young to really appreciate it. I never connected to a BBS using an acoustic-coupler or anything cool like that. Then one day I realised it was true that the majority of first year computer science students had never used floppy disks (and probably never seen a 5.25 inch one) or a real DOS prompt! Computing has moved so fast that everybody can tell stories that sound to people ten years younger than them like walking uphill both ways in the snow. Thus, everybody's story of their history with computers becomes worth telling because even if it looks boring today, it will seem baroque and interesting to enthusiasts from the very near future. In that spirit, this page is my attempt to cataloging my life's experiences with computers, before I start forgetting things.

The first computer that I ever had any experience with was the Commodore 64. My parents bought it second hand, and I actually remember the night we bought it. It's probably one of the earliest memories I have. The previous owner played Buggy Boy to demonstrate that the machine worked. It's possible that this was the first video game I ever saw, but it may not have been. I don't know exactly when we got the Commodore, but it must have been the very early 1990s, or possibly 1989 at the latest, so this was well after its initial release in 1982 (although it probably came to Australia a few years later than its US release, like everything does).

The C64 was a fairly ubiquitous part of my early childhood - my household had one, my cousins had one, one set of grandparents had one and at least two other kids in my neighbourhood had one. I guess because by this stage it was late in the machine's life cycle, almost everyone used 5.25 inch floppy disks. Of the five machines I remember, only one of them came with a cassette tape drive. Our machine had a mouse, but the only program that could make use of it was something boring like a spreadsheet or database application.

For the most part, I knew the C64 purely as a gaming machine. I knew that at least one non-game program existed - the boring office thing that I had to run to play with the mouse - but I never used it. I've tired to compile a list of all the games I remember. I know now that 99% of the games we had were pirated, but I didn't really have any understanding of what this meant when I was a kid. Everyone I knew who had a C64 basically only had pirated games. I copied games for and from my cousins using the program "Fast Hack'em". Nobody had more than one disk drive, so you had to insert the "source disk", press a button to load as much of the contents as could fit into the C64's memory, then swap to the "target disk" and press a button to dump the memory to disk, and then repeat for as many times as it took to transfer the disk's entire contents across in tiny slices.

I never really did any programming on the C64. My grandfather did own a set of maybe 4 or 5 books on programming the C64, in BASIC of course. I once painstakingly copied the code for a simple tank game into his machine from the book, with absolutely no understanding of what I was doing. I finished typing it all in, it didn't run, I didn't know why and that was pretty much the end of it. I think the only thing in those books I ever used repeatedly and reliably was changing the screen's background and text colours with some POKE statements. 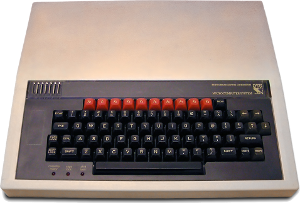 My primary school, which was a very small rural school that only had 3 classrooms, had 2, or possibly 3, BBC Micro computers. These were shared at a ratio of something like 20 kids per machine, so we each only ever got to use them for a short amount of time every other week or something like that.

The only thing that I remember doing with the BBC in my classroom during actual scheduled use of it was playing a game called Podd. Podd sounds amazingly boring in retrospect, but I know I really enjoyed it at the time. You would type in verbs and if your verb happened to be one of the 120 that the game knew you were rewarded with an animation of a red spherical creature acting out the verb. The Wikipedia article makes it sound like the aim of the game was to discover the verbs by trial and error, but at my school all of the verbs were printed on little bits of card in a big tin, and we'd take turns picking a card out by random and typing it in. So there was no guessing involved, and all of the fun was derived from hoping that you'd pick one of the exciting verbs, like explode. I honestly don't know how this kept any of us entertained for more than five minutes.

However, for a short while one other student (actually my neighbour) and I were allowed to use a different BBC Micro during our recess or lunch breaks. I suppose we were chosen for having shown some kind of aptitude with computers, although looking back I don't know how on Earth we could have done this given the combination of our ages and the machines and software we had access to. It would be hard to have not shown an aptitude for playing Podd. Anyway, this BBC Micro had some sort of ancestral form of Lego Mindstorms hooked up to it. There was a little box connected to the BBC which had five or so plugs on it you could use to connect little Lego motors and lights and to, and you could use the BBC to turn the individual plugs on and off for different durations of time. This wasn't done with code, otherwise I doubt we'd have ever got it working (we figured out how to use this Lego stuff by ourselves unsupervised - I doubt any of the teachers had any idea), but using a program where you used a grid to control things. Each column of the grid represented one of the controllable Lego devices, and each row specified whether or not each device was on or off at the corresponding moment of time. Each row could be assigned a duration in seconds and the program just ran down the grid one row at a time at the appropriate pace. Either there was no capacity for flow control or we just never figured out how to use it. Nevertheless, this system was sufficient to get little Lego vehicles to slowly trace out paths of our own choosing, which was pretty cool. Despite the fact that it happened very early on in my schooling, and at a small under-staffed and under-funded rural school, this was probably the best computer-related education I got before university which related at all to programming. 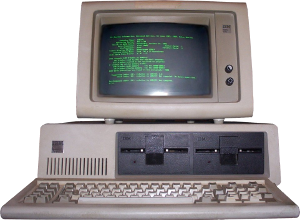 I suspect it was around 1992 or 1993 when our household first acquired what would today be called "a PC", but back then was more typically called an "IBM compatible" - a beige box with an Intel-compatible CPU in it connected to a keyboard, mouse and monitor. It didn't actually look much like the photo to the right, which is an actual IBM PC. Our PC wasn't a branded computer, it was a "white box" machine made by a long defunct store called "Wombat Computers", in the AT form factor. I don't know what kind of specs this machine had, but I suspect it was either a 386 or 486. Not unusually at the time, it had a "turbo" button alongside its power and reset switches, which could be used to toggle between two clock speeds for the CPU. Of course, there was no CD-ROM drive, but 5.25 inch floppies had given way to their 3.5 inch descendants by this time. Some machines around this time had both sizes of drive. Inevitably, the smaller drive was designated A: and the larger drive B:.

The machine ran Windows 3.1, although it didn't boot into Windows by default. On boot up, it loaded a DOS program called "Quick Menu", which provided a Windows-esque GUI that could be used to launch DOS programs using a friendly folders-and-icons paradigm. For programs which required Windows to run, Windows could be launched from within Quick Menu. When you were done, you quit Windows and dropped back to QM. In those days Windows was more like a program than ran on top of DOS than a standalone OS in its own right.

I don't think I ever ran anything under DOS that wasn't a game. Here's a list of all the early PC games I can remember playing, the vast majority of which were DOS games. This was the age of "Shareware", a business model wherein game developers would write games which consisted of several "episodes", and then sell just the first episode very cheaply and give you permission to share copies of that episode with your friends. If you wanted the full game with all its episodes, you had to pay a higher price and of course you weren't allowed to copy it. Cheap variety stores like Cunningham's Warehouse in these days had rotating racks of shareware DOS games, for about $5 each, and I bought a lot of these. The vast majority of them fit on one 3.5 inch disk and were published by a company called Apogee.

However, the PC was also the first computer that I ever had any substantial non-gaming experience with, and where I began to learn a little more about how computers really work. My experiences with the Commodore 64 and BBC Micro gave me no exposure to ideas like filesystems, or the difference between executable and data files - it's not that the machines weren't capable of teaching me that, it's just that the way I used them didn't lend itself to learning much. In the days of those machines, hard drives were expensive, so you just loaded your games off floppies each and every time you wanted to play them. But on DOS machines, you did install things to the hard drive, and just that simple process exposes you to some extent to the way computers work.

Windows 3.1 also introduced me to a world of non-gaming software, a lot of it either productivity or education related. In those days, Microsoft Office didn't have quite the dominance it does today. Microsoft Publisher and Microsoft Works were also around, and I played around with all of these quite a bit. At the time CD-ROM drives become somewhat common, the average household didn't have any internet connectivity at all, and Microsoft Encarta was the order of the day for school projects. It was kind of like Wikipedia on a CD, though of course it only dealt with the kind of stuff you'd find in a traditional paper encyclopedia. I have to imagine that school reports in the mid-1990s basically all looked more or less the same, since everybody did their research using the exact same tool. We also had Microsoft Cinemania, which was kind of like IMDB on a CD.